Don’t you know that you should eat more HOLE foods?! 😂Do you know of those little mini cinnamon sugar donuts you can sometimes get at county fairs? These Mini Cinnamon Sugar Donuts remind me exactly of those, but gluten and dairy free of course!

I really think the combination of the coconut milk and dairy-free sour cream make the texture and taste of these donuts perfect!

Here’s everything you’ll need in your kitchen to get started:

This recipe has been adapted to be gluten and dairy free from Just So Tasty. 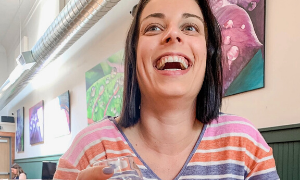 I’m Bren, the Breadless Brunette. It’s nice to meet you! I'm sharing everyday life while being gluten and dairy free in the Northwest and beyond. Follow along as I share my adventures!